Here’s a selection of his comments.

What happened to programmatic out of home during COVID?  How did Adomni respond?

In March when the governors started telling people you must stay at home and everyone was hoping it was going to just be for a short while just to flatten the curve a lot of the advertisers responded in a very extreme way.  Across the board.  You saw companies saying we need to pause anything and everything right now until we figure out what’s going on.  So there’s some channels where hitting the pause button could happen in literally minutes.  You see that in the online programmatic world and in our world as well…That was the first wave – March April May.  And then what we started to see is that there were little nibbles in terms of marketers asking for outdoor at first.  Billboards being the most prominent media out there and as people started to say I can’t stay in my house any more, I’ve got to get out, I’ve got to take the kids out of the house, I’ve got to just go for a hike or whatever it was, we really shifted our sales and approach to saying look, these roadside digital billboards in some cases have more audience than they did before covid happened…our sellers and our marketing was getting behind sure there are some media types that are not open yet, whether it’s cinema lobbies or gyms…but hey, we’ve got billions of impressions of billboards…

In 2019 you claimed that programmatic can double the DOOH ad spend.   Want to revisit that forecast?

I think that we can more than double…I think that’s possible even within the next 2-4 years.

How does that happen?

In the US we’re somewhere between $2.5 and $3 billion across all of digital out of home….What do we need to do to go from $2.5 billion to $5 billion…For us it’s thinking about how do we bring new buyers into the marketplace…The first is the programmatic online digital media buyers.  Those are the companies that are buying mobile ads and now they’re buying connected TV ads, display video ads by going into a platform and building their campaign…In the US along over $50 billion a year is spent on just online display ads…When marketers are buying their display banner ads the average click through rate on a banner ad…is around 0.3%.  One out of every 300 people who see a display banner ad will click on it…Display ads are billboards.  If 299 out of 300 people aren’t clicking on it then marketers are OK with a medium that’s pretty much an awareness/billboard type model…

It’s a concern with Apple with what’s about to happen with IOS 14 and then trying to clamp down with some of the location access.  That’s a multi-billion dollar question…For us in our of home the thing that really matters to us is that Geopath – the trade group that measures and provides estimated impressions – they’re heavily reliant upon mobile…And also our ability to quantify for attribution studies and for lift studies…it just means that you might have to have a larger campaign with more time or more ads served in order to measure it with statistical significance.  Which is definitely is the wrong direction that we want to be heading in.  We want smaller campaigns…

Talk about Adomni’s partnership with Uber

We had this partnership with Uber that was geared to launch at the end of Q1 and Q2 was going to be a big coming out and we’re excited about that as well.  We still think the street level digital screens as a complement to digital billboards – that’s something that we’re investing in.

1000 vehicles have been deployed…like a lot of companies Uber had a rough Q2 as well but they’re really rebounding…with a lot of people not taking transit Uber is the mode of choice…Three cities are operational.  We’ll be announcing more in the next month or two because it’s definitely not stopping there.

How are the Uber ads triggered?

There is a geofence triggering component to it…it is a little different than billboards.  For most billboards you have either 6 or eight slots and it’s a fixed duration.  A one minute look or a 64 second loop.  With Uber because we’ve got hundreds of vehicles that are roaming around the city at different times and turning on and off differently there’s not just one loop that operates like a digital billboard…It is 8 second ads…they are video supported…the neat thing about what we’ve done is through our partnerships with the billboard operators and  owners we are able to tell that story on the tops of the Ubers and on the digital billboards as a screen sequencing. 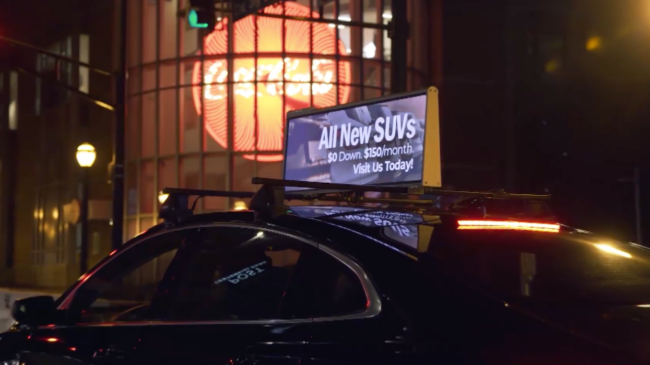 So the ad on top of the Uber car will enhance the ad on the digital billboard?

That’s exactly right.  So it comes in two flavors.  There’s some brands who just want to own the market.  They want everyone in Atlanta to know about this new product or service.  And so they’ll be doing a campaign where the billboards have one of the 8 ad plays or 2 of the 8 ad plays…and then a similar ad with video is playing on the Ubers.  So when you’re in the passenger seat or you’re a pedestrian walking down the street you look up and there’s that 14 by 48 ad and you look at a side and there’s an Uber of the ad.  It’s penetrating that mindshare that everyone is trying to get…Then there’s another cool thing that we’re doing….because we know where the vehicles are…we can also have brands say but you know what, I really only want to heavy up on those ads being shown on the billboards when there’s cars in proximity…

Myths about programmatic out of home.

Number one, programmatic should be looked at by the media owners as an extension of their business.  I think for a very long time it was viewed as a competitive sales channel and as something which could be more of a risk.

The number two myth is…this fear of racing to the bottom because so much supply and not as much demand and so the price ends up going down…With us media owners set the price…and they can change the price any time they want…There’s that scarcity angle that we have that ought to be able to maintain prices and in the next few years we actually see prices going up on digital out of home….

The last one would be just how easy it is to execute.  There are now more ways to buy programmatically out of home than there ever has been…it is easy, you just need to get an account set up with one of the platforms.

Andrea Messimer-Henley on How to Sell Out of Home

Adomni, Amobee, and All Things Out-of-Home